My next post was going to feature pictures of our huge load of fencing stuff and a puppy picture. And maybe whining about not getting much knitting time because of all the fence building. Instead, it will include me regaling you about the sheep escaping. I would like to call it ‘The Great Sheep Escape’, but if I did, it would just guarantee an even bigger and more exciting snafu down the road. So I won’t. When I went to refill their water trough and get them in tonight, I had no sheep. I thought it was odd when not a one poked its head out of the barn. And the hole in the fence wasn’t real obvious. I was concerned that some weirdo might have stolen my sheep to eat them. I ran to the house and told Brent they were gone. Then I ran back up to the pen and found the hole. I felt better knowing they were just escapees. That was when they appeared, trotting, bucking, and just generally showing off how smart they were for getting out.

It is times like that when you really wish you had a sheep dog. Or fences. Or a bunch of panels you can set up to trick/force them back home. Instead, I had to be sneaky. I put big leaf of hay in the pen and then tore off a few chunks and threw it out to lead them in. Then I left them. They are now safely imprisoned in the barn. Smart alecs. Wanting real grass instead of boring old hay.

The goats were elated to see me when I went up to the barn. In fact, I think they were quite happy with the situation. Finally those sheep were GONE. Either that or they wanted me to know how GOOD they were compared to those naughty sheep. The goats apparently had NO interest in leaving. 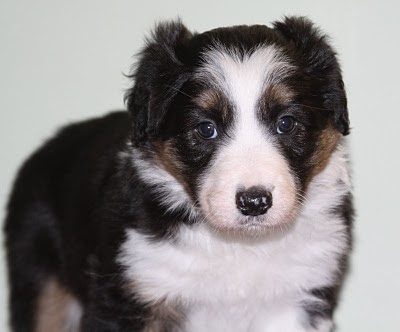 This picture is from Jodi’s puppy blog. Jodi also blogs here. Ain’t she the cutest? I can’t wait to have her cute little self here.

Now that you’ve seen the puppy cuteness, the down and dirty work: 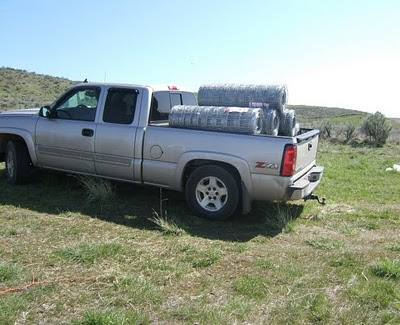 The poor truck. We almost had second thoughts about taking it all in one load. But we did, and I am glad. Friday, we drove a lot of posts. Yesterday we did quite a few, too. Today we rested and just helped Brent’s mom. Here is a picture from Friday: 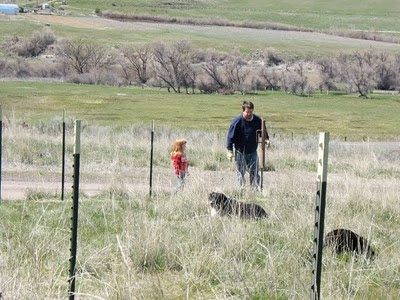 The dog in the picture is Sunny. She belongs to my little brother who is having an adventure in another country right now. The other black blob is Mouser, who has appeared here before. Once looking into a bucket containing a mouse. Sunny is a border collie cross and is a very fun dog. Unfortunately, not a trained stock dog. However, she is very sweet and she’s a joy to have for several weeks. I might not want to let her go home. It is really fun to have a dog I can take out of the yard with me. Sam is too blind to have out wandering around. Naturally, the kid and the man are mine. Knitter #3 and Brent. Hard at work.
Labels: dogs sheep

jessie said…
We let our goats and the one sheep out the other day while we were moving their fence (they're fine until they storm the chicken coop and eat all the feed).

We lost track of time and the next thing you know, the goats are back but Sophie the sheep is nowhere. She is a definite flock girl, hates to be alone, but we searched high and low for 10 minutes, and found nothing.

Finally, we heard a bleat. She had been standing in the driveway behind my husband's truck.

She had the nerve to act like WE had left HER there. :-)