Wow, it seems like there’s been so much keeping me from posting. School stuff, outside work, inside work. Work, work, work. I just want to time to sew and knit! All this work business is for the birds. I need lots of leisure for knitting.

I am officially on summer break. Knitter #2 will be on break starting Wednesday afternoon. I plan on spending a lot of time knitting and sewing. I need to get some stuff made to take to the fair.

Here are a few things I’ve been up to lately:

I made dog treats: 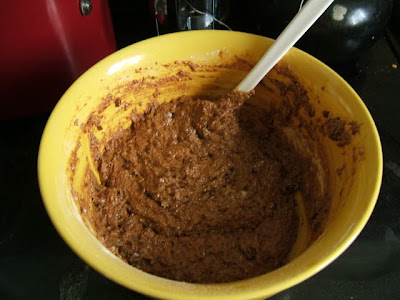 They were training treats. The main ingredient is pureed beef liver. No shot after they were baked, because they looked like poo. My kids even thought so.

Knitter #3 and I made Rhubarb Pie: 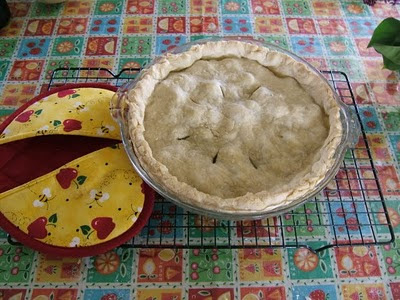 Brent asked for it and loved it. He is now sold on rhubarb. Incidentally, I have the same rhubarb plants that I ate from as a child. It is a testament to how tough that stuff is. It grew unattended and unwatered at Dad’s for atleast 15 years. It is thriving here.

And lastly, something Brent built: 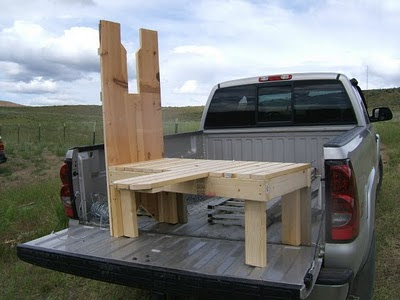 So I could get the goats trained to it for milking: 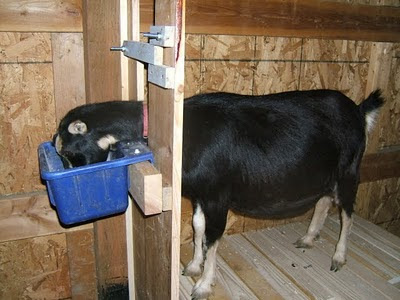 And hoof trimming which is sorely needed. Zoey and Belle are not real keen on it right now, but they will thank me later. Maybe. I grew up with cattle who never had to get their hooves trimmed, so I wasn’t expecting hoof trimming to be something I needed to do. I felt like an idiot when I realized I should have been trimming their hooves from the time they were little. Live and learn. At least their hooves aren’t really bad. I read that not trimming them can be crippling.
Labels: cooking goats sewing The Fair

Quilting Mama said…
Lovely Pie! Strawberry Rhubarb is a fav with us too.
Congrats on the historic plants. I think older rhubarb gives better quality.

Wow hoof trimming - Never would have thought
10:52 AM