I finally took pictures of my finished mittens today: 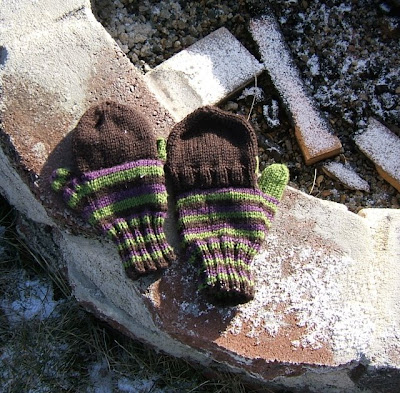 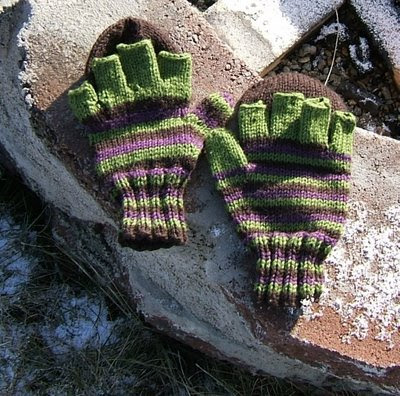 I took pictures of both so you could see the differences in them. I definitely like the second one better. The ribbing on the back side of the mitten cap makes a huge difference in the fit. I love my new mitten/gloves.

The spinning is progressing. I am not finding a lot of time for spinning, so I am not getting much practice in. Right now, my biggest problem is the yarn wrapping around the spindle shaft rather than on to the bobbin. I suspect that I am going too fast. If there are any spinners out there with input, I will gladly hear what you have to say!

I decided I was being just a little freaking paranoid the other night and I am really not pregnant. I did not buy a test to reassure myself. I am that confident in my paranoia. My new paranoia involves the jar of blackberry jam that I opened a while ago. When I opened it, I found some jam on the top rim of jar and I am concerned that might have kept it from sealing. So I opened another jar to eat from. I sniffed back and forth and I really don’t think they smelled the same. The possible bad one smelled a bit sour. When I made it last summer, I followed the recipe in the pectin box and used the inverted jar method to seal it. I think I am going to toss it just to be safe. I used the second jar to make blackberry yogurt for lunch. Yummy!
Labels: mittens spinning

Sarah said…
A little paranoia is good for you! I think we all do those things. If you can't trust your own intuition, what can you trust??
10:00 AM

Rima said…
Cute mitts! Look nice and warm! And I would love some of that blackberry stuff...
1:21 PM

Rebecca said…
How's the spinning going? It is easy to go too fast; I imagine more so with a double treadle. Also, try adjusting your tension. Start with it on the loosest setting, and slowly adjust it so that it is taking up the yarn but not ripping it out of your hands. I just pulled out my wheel again the other day, and it seems I am out of practice.
6:20 PM