It’s been a while since any of the animals appeared here, so earlier this week I took some pictures of them: 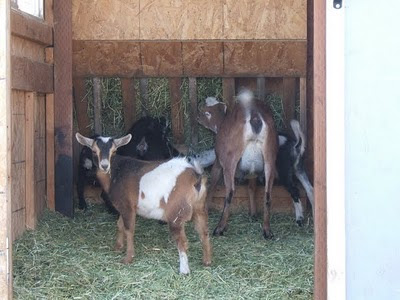 Meet Sylvester. He joined our herd a few weeks ago. He is half Nigerian Dwarf and half miniature La Mancha. Which means he’s really more than half N.Dwarf. His father was not registered, but his mother was. Maybe we’ll get a registered herd sire some day. Sylvester’s job is to be handsome and keep us in babies. Every night, as I force him into the barn, I tell him it is his job to protect his women folk. He wants to tell me that he doesn’t like them and they really aren’t very nice. Little does he know how they will one day think he is the hottest, hunkiest dude ever. 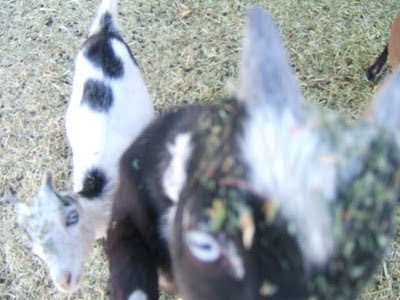 This is Kisses and Hugs. They and brother Stanley are now hornless. In this picture they really wanted to know what the camera was for. It might have been edible. 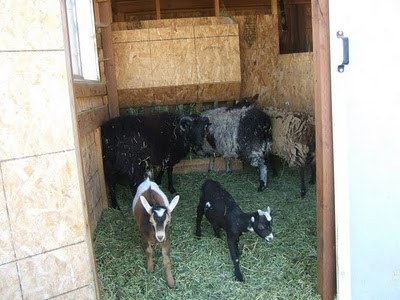 Sylvester and Stanley. And the sheep. Sheep like to eat. Just ask the goats. Sylvester thinks sheep might be nicer than other goats. 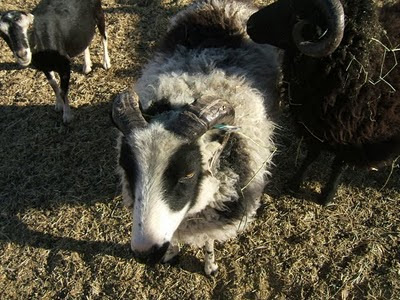 And here is Skye. Mr. Cool. He’s the leader of the sheep. King of the connivers, really. Those three are always conniving.

The three that are now hornless are pitiful looking. Next year, my brother can hold the goats while I run the dehorning iron if he is around to help me. Otherwise, Brent will have to seriously toughen up. Taking them to the vet left them not feeling too great for a day or two. They’ve been staying in the yard for several days. They go back to the barn at night.

Tonight, all the animals are shut in the barn. The coyotes have been coming in very close the last few nights. I am pretty sure they trying to figure out how to get in and get all my delicious smelling livestock. Even though our barnyard is well fenced, last night I worried about the sheep. It sounded like there were at least 5 of them and I was thinking how nervous they must be making the sheep. If the coyotes don’t drift away real soon, I’m going to get a shotgun after them. They’ve never been a problem for us before, but we are experiencing an explosion in the rabbit population. And that means there are probably going to be more coyotes around to cause problems. Last night, Brent got up for another reason, and the coyotes split. I want to sneak out in the dark and shoot the shotgun off. Maybe they’ll get the idea and not come back. Coyotes are very, very smart animals and know how to take a hint.
Labels: goats sheep

jessie said…
Why do goats come closer and closer to the camera, like toddlers?

I heard on the radio that, at least in upper NY state, there was a glut of acorns this year (happens every few years). That in turn will make a glut of mice and other small rodents, who sometimes breed all through the winter if the acorns are plentiful enough. And that means next year a big increase in foxes, and coyotes and such.

Just a heads up. (Boy, do the coyote yips and howls make my blood run cold.)