When you make cinnamon rolls for breakfast, the rest of the day just goes better than if you just had cold cereal or toast. I spent my morning with a good book and warm mugs of tea on the couch. I hope yours was just as nice.

Yesterday I finally sat down at the sewing machine and got out the button hole foot. I got all my buttonholes done and now I have a bunch of buttons to get sewn on. I also dug through the stuff still piled around from when we painted and found my patterns. They are patterns for dolls that I have made up myself. And I got a fabulous idea for bunnies to make the girls for Easter. I don’t know when it is this year, I’ll have to check. A couple years ago, I made them some cool bunnies that I had seen in an embroidery book. I’m thinking of making some even cooler bunnies using the pattern I drew up for the first ones. Speaking of Easter, my Mom had the coolest Easter basket when I was a kid. My Aunt Icil made these baskets from a pattern in a magazine once upon a time. It was crocheted with variegated thread, starched, and dried on an upside down bowl to give it the shape. It was beautiful. If I could find the pattern, I could make some this year. I copied the pattern once upon a time and I think I came across it some time in the past year. Or maybe my mom had gotten a copy from my aunt and I found it. If I am lucky, I will be able to find it again. I wish I had a picture of the one Mom had.

Anyone out there joining the Ravelympics? I went hunting for it last week and signed up. I am going to make myself a Bonsai Tunic from the Spring 2007 IK, page 67. I am making mine with Brown Sheep Lamb’s Pride worsted. I got the idea when I ordered some yarn last summer and was sent the worsted instead of the bulky I ordered. For the past year, I’ve been working up to an obsession with knitting vests. For a long time I have admired More Stripes by Amy King for a long time. And the Bonsai Tunic. And Talia. Obviously, when Soria came along, I was going to be obsessed with it. Anyhoo, last summer I was ordering yarn for Talia and Versatility (strangely, not a vest) when I was sent the “wrong” yarn that seemed like it would be great for a Bonsai Tunic. I don’t have yarn to make More Stripes yet. Maybe a I could knit a few more before buying yarn for another! I started into my vest knitting in August when I knit this fabulous little vest from DROPS: 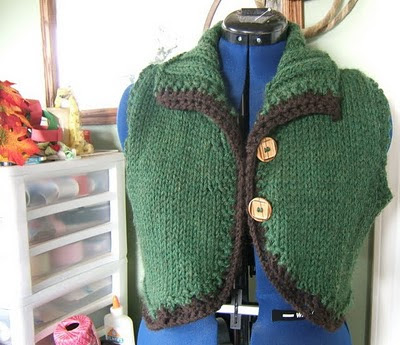 I love it, but if I make another one, I won’t bother with the buttonholes and buttons because I prefer it unbuttoned. It fits so well that I don’t really need the buttons and it adds just the right amount of warmth when it is cool.

Wow. I have a lot links for this post. Maybe after that I should knit a vest.
Labels: cooking crochet sewing vests