Here are some delightful shots of unblocked Soria on Tulip: 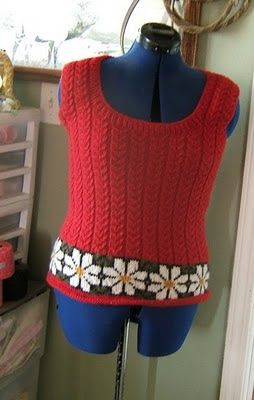 I am not so sure how well stopping the texture where I did works. I opted not to do the upper band of color work. We will see how she does at the fair. I have no doubt she’ll be fabulous to wear in the winter.

My new finish project is the pink sweater: 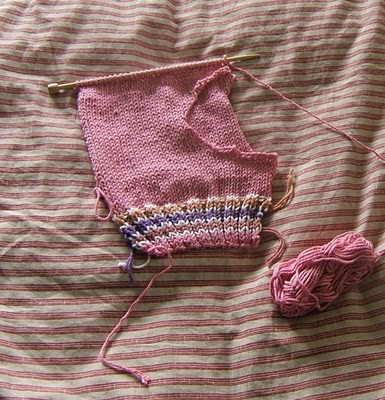 I started working on it again just before the pocket shaping. When this one is done, I may start one of the other projects for the fair. I had considered starting one when I finished Soria, but I decided not to. I want to end up with fewer projects, not more.

I still haven’t taken pictures of the new babies. I keep forgetting to take the camera to the barn. This morning it was a disaster. I put both moms back in the main pen and then put their babies with them. Everyone was nursing the wrong mothers. That wouldn’t be such an issue, but the little ones need their colostrum. So I grabbed the new babies and put them in the stall they were in last night. But one of them was the wrong baby. This is a problem when they all look alike. Good thing the kids noticed he had blue eyes. I eventually got everyone sorted. Tomorrow the hobbles are supposed to arrive. Then we’ll see who puts their foot in the milk bucket. I am also going to start milking Zoe tomorrow. Hopefully, she is better about things than her sister.
Labels: goats sweaters The Fair vests

Quilting Mama said…
Soria is beautiful. I don't think a second color band is necessary, but then I live in solids.
The kids are so cute. I don't dare let my pair see your new ones. They will just add goats to their list of animals. The city wouldn't look kindly on goats in my front yard.
7:04 PM