First things first. A Halloween shot for everyone. The clematis was a lot perkier yesterday. This morning it was 16 degrees F, and who doesn't feel less than perky when it's that cold? 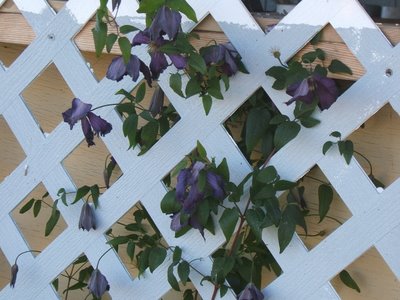 Now I have an interesting tale for you that could probably only happen on this day of days. This morning I went out to feed the birds and let them out of the coop. The new ducks don't go in, so they were right there in the pen waiting for me. As I am filling the feed bucket, I hear some odd noises and some quacking. I look up to see a duck flying down the draw. I thought there must have been a wild duck up here with mine. Ha! It was one MY ducks flying away. She is getting her wings clipped if she comes back. The little wench has already run off once. Domestic mallards aren't supposed to be able to fly. Halloween, I tell ya.

Now, on to other things. I got a package in the mail yesterday. A surprise package. It had lots of fun knitting goodies in it, too. There was tea, an adorable sheep tape measure, handknit gloves, and yarn! Someone knit something for me! I haven't had anything knit for me since I was a teenager. You know, knit by other people. And the yarn is Mountain Colors Bearfoot in the Ruby River colorway. I was actually thinking about buying that very yarn for myself. How cool is that? 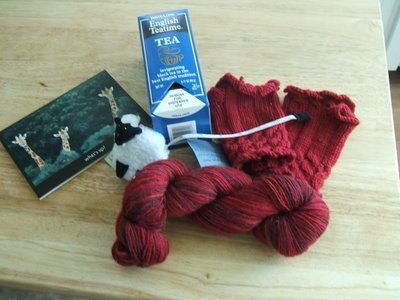 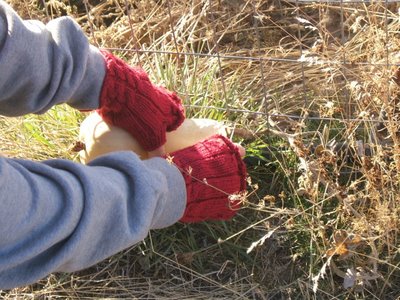 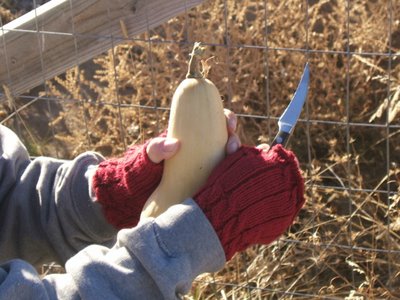 That last shot was to show off the lovely, 'fetching' pattern. Many thank you's to my secret pal.

Marina said…
Isn't it fun to receive knitted gifts! The fingerless gloves are lovely and the yarn, gorgeous.

Lone Knitter said…
That is such a cute sheep tape measure. If I had a tape measure like that, I don't think I'd lose it. That butternut squash is making me hungry!
9:35 AM