It appears I may have to eat my words of January 2:

There is this big, good looking buck who likes to bring some of his best lady friends and their children along for the haystack buffet. If I thought he might drop his antlers right next to the stack, I might feel a bit more forgiving. But I am pretty sure he won't. No free antler hair sticks for me, no free hay for him.

I found this item this morning: 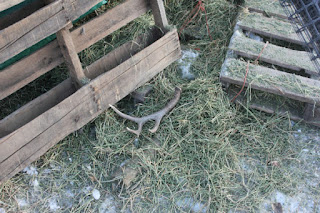 It's partner was buried in some hay. A matched set. NICE. Thanks Mr. Buck. Brent thinks these antlers may not belong to the buck we had been seeing there. He thinks that buck was bigger. Maybe. Or maybe his eyes had big buck fever and enlarged the antlers by 10 in his mind. I don't care, they are pretty nice looking antlers. And they're mine. I am convinced Cernunnos is involved in all this.

On to knitting. What should I cast on next? Something to think on. I have some socks for me on the needles, so it won't be socks. And I don't think it will be a sweater. Not until the vest is done, anyway. Maybe some kind of accessory. I need to go study my Ravelry Queue. There's tons of stuff there that I actually want to make.
Labels: paganism

Michelle said…
How about this?