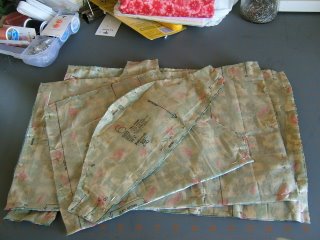 Here we have sewing. To be precise, we have a little girls dress. Butterick 6361. It is a watermelon print that I have had for years floating around in my fabric stash. Originally, it was intended to be a set of kitchen curtains. It will be much cuter as a dress.

The new baby sweater project is coming along. I'll have to take a picture of it to post. I didn't want to post a picture until there was actually something to see. I love doing colorwork. My first knitting project was colorwork. It was a yoked fair isle. Really, it wasn't my very first project. That one had been done several years before the fair isle and was a complete disaster and I was never able to wear it. I did it in what turned out to be a sport weight yarn. The pattern called for a bulky yarn. I learned how to knit on it, so I guess it wasn't really a total loss. That was 13 years ago. My knitting has improved over the years.